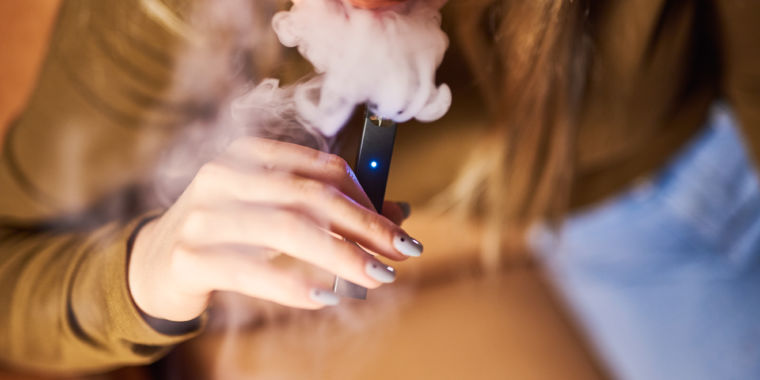 The Centers for Disease Control and Prevention announced Saturday that it is investigating a puzzling burst of severe lung-disease cases linked to e-cigarette product use or “vaping.”

Between June 28 and August 15, health officials have counted 94 probable cases of severe lung illness in 14 states, the CDC said. Officials haven’t found any conclusive evidence to suggest that an infectious illness is behind the cases, the agency added. The only common thread so far appears to be recent vaping by those afflicted.

The CDC is working in close consultation with officials in some of the hardest-hit states, including Wisconsin, Illinois, California, Indiana, and Minnesota. Wisconsin alone reported 30 of the 94 cases.

In many of the illnesses, people experience shortness of breath, fatigue, chest pain, cough, and weight loss, the Wisconsin Department of Health Services reported in its outbreak investigation notice. The cases appeared mainly in teens and young adults at first, the department said. But now officials are seeing cases in older adults as well.

Investigators are trying to find out more information about specific e-cig products and brands that are afflicted. Officials in Wisconsin have reportedly sent some cartridges of suspect vaping liquids to the Food and Drug Administration for testing. Wisconsin's health officials noted that “

In one Wisconsin case, a 26-year-old man with asthma ended up in an intensive care unit in July with difficulty breathing after vaping THC oil he bought on the street, NPR reported. (THC or Tetrahydrocannabinol is the primary psychoactive ingredient in marijuana.) The man's blood-oxygen levels dropped to just 10% and he was placed in a medically induced coma.

Now out of the hospital, he told NPR that he suspects his illness was linked to THC oil. "The oil in the cartridge was really watered down. And it was pee-colored, it wasn't supposed to be that color, it's supposed to be a dark amber," he said.

He cautioned other people who vape THC: "If you're going to smoke, just stick to the dispensaries. Don't buy stuff off the street where you don't know where it's coming from."

July Labs, the dominant e-cigarette maker in the US that has drawn scrutiny from federal regulators, said in an email to Reuters that “[l]ike any health-related events reportedly associated with the use of vapor products, we are monitoring these reports. ”

"These reports reffirm the need to keep all tobacco and nicotine products out of the hands of youth through significant regulation and access," the statement read. July went on to note that some of the cases appeared to involve THC, a controlled substance that the company does not sell.

"We also need to ensure illegal products, such as counterfeit, copycat, and those that deliver controlled substances, stay out of the market and away from youth," Juul wrote.

While e-cigarette proponents argue that the products are significantly safer than traditional cigarettes and can help smokers quit, July and others have faced intense criticism for allegedly marketing their products to teens, helping to spark what the epidemic of youth has described. e-cigarette use. "

Beyond the potential for life-long addiction to nicotine, health officials fear the potential long-term health effects of vape liquids, which have been found to have a wide variety of chemicals and components. Some contain flavorings that have been tested for safety in edible foods but not for inhalation. Researchers reported that some vape liquids — including those sold by July — can create irritating compounds when heated.