Let your friends know what you're reading on your social network

Dylan Larkin left the Red Wings game in pain. Here's what we know

The link has been sent to your friend's email address. 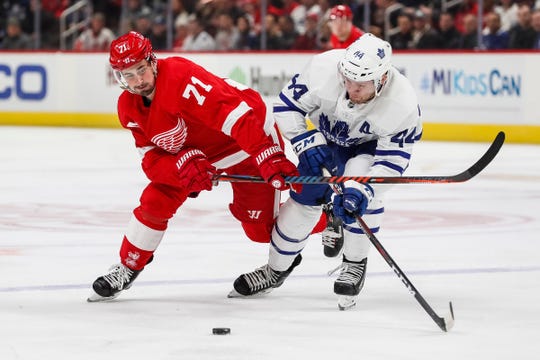 Detroit's red wings Won the gamebut lost the best player during that time.

Dylan Larkin left overtime on Friday between the wings and the Toronto Maple Leaf after he went to Mitch Marner. Larkin seemed to hurt his rib and doubled as he walked through the tunnel to the locker.

There wasn't much information right after the game, but here's a coach Jeff Blashils.

"I don't have an update for Dylan. He's a little upper body. We'll find out more tomorrow."

Blashill said Larkin and his wings are going to Ottawa, where they play on Saturday.

Larkin won the season's 22nd goal during 3-2 victory. He guides his wings to goals and points (49).

In the wing, Luke Witkowski has only one healthy reserve.

After Ottawa, they haven't played until Thursday.