ADNOC concludes a framework agreement with the National Bank of Uzbekistan 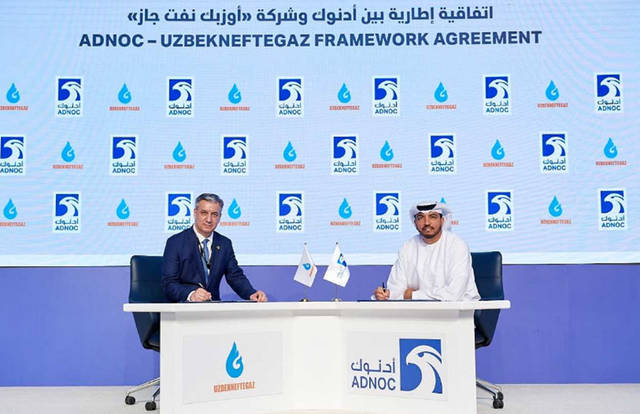 The statement said the agreement provides for strategic advice on the exploration, development, production, gas, recycling and petrochemicals of the oil and gas in Uzbekistan.

"ADNOC has a solid 47 years of experience in Abu Dhabi with the oil and gas industry, and has helped bring more value to outdated and new resources," said Omar Sweena Al Suwaidi, Executive Director of ADNOC.

Ozbek Oil Gas was founded on May 3, 1992, and in 1998 it was transformed into a public joint-stock company with outstanding partnerships with the Korean National Oil Company, Lute Chemical Company, Koga, China National Petroleum Corporation, Lukoil, and Russia and other the company "Gazprom".

The company is currently implementing strategic projects such as the development of a gas liquefaction plant and the modernization and development of Shortan Gas and Chemical Complex.

"ADNOC benefits from all its resources, partnerships, skills and competencies and cutting-edge technology to maximize shareholder value and has shown that it has succeeded in finding solutions to the challenges and difficulties it faces," said Kharum Ashrafhhanov, President of Uzbekbaftaz Jazz .

According to industry sources, the oil and gas industry has been concentrated in the studied basins, mainly in the central and western parts of the country.

However, the eastern old oil producing area still has the potential to use modern technology to develop some of the oil and gas sectors that are discovered or will be discovered in the region.