The founder of the Turkish Republic, the brave and unforgettable leader of Mustafa Kemal Ataturk, 80 years ago, nine watches in the Dolmabahce Palace died on November 10, 1938, on five lives.

Anatolia, as well as the death of the whole world, became obscene. We remember Mustafa Kemal Atatürk with love and hope … 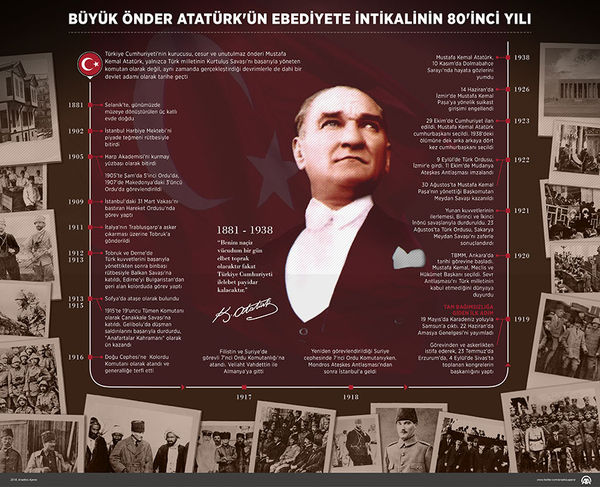 The great leader, Atatürk, was born in 1881 in Thessaloniki, in a three-story house, which was already transformed into a museum. His father was Ali Riza Efendi, and his mother was Zübeyde Hanım. Atatürk attended elementary school at Shams Efendi School in Thessaloniki. He continued his studies at the Military Military School in Istanbul and in the Manastir Military High School. In 1899 he entered Istanbul Harbiye Mektebi and in 1902 he graduated from the Military Academy in 1902. 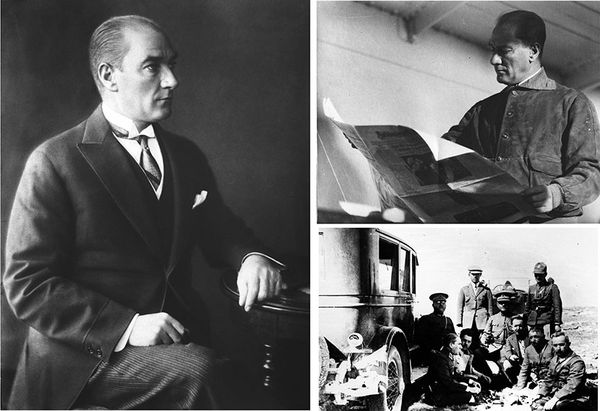 Mustafa Kemal Ataturk, in 1905 in Damascus, 5th Army, in 1907, was appointed to the 3rd Army in Macedonia. While working at the Monastery and in Thessaloniki, he worked in an army of operations, which in the year 1909 sabotaged the March 31 case in Istanbul.

Ataturk, who participated in the operation to suppress the Albanian uprising, was sent to Tobruk in 1911, when Italy launched troops in Tripoli. After successfully leading the Turbine forces in Tobruk and Dernä, Ataturk, who in 1912-1913. In the year he joined the Balkan War with a leading position, served in a corps that led Edirne from Bulgaria. 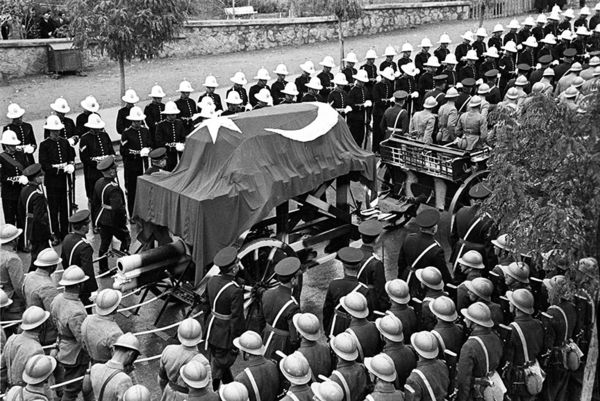 Atatürk, who was an attaché in Sofia from 1913 to 1915. In the year, he participated in the battle of Kaanakal in 1915 as the 19th Division Commander in the First World War. Mustafa Kemal Atatürk successfully stopped the enemy attacks in Gallipoli and gained a reputation as Anafartalara's hero.

In 1916 he was appointed head of the corps on the eastern front and was promoted to general office. In 1917, Mustafa Kemal Atatürk was appointed to the 7th Army in Palestine and Syria. In the same year, Atatürk went to Germany with Crown Prince Vahdettin.

He carried out an investigation into the German general and the German wars. In 1918, when he was the Commander of the 7th Army, the Syrian Front, he returned to Istanbul after Mudra's arrest, signed at the end of the First World War. In order to save the country from the enemy's occupation, it is a secret purpose, leaving the Inspection of the Istanbul Army. The first step to complete independence

Mustafa Kemal, who arrived in Samsun through the Black Sea on May 19, 1919, published Amasya Circular on June 22, 1919. The Turkish nation, "the independence of the nation and the nation is threatened, determination and resolve to save the homeland in Sivas, will gather the congress," he said. In addition, he resigned from the Ottoman government and left the military on July 23, 1919, in Erzurum, on September 4, 1919, in Sivas, led the Sivas Congress.

In these congresses, decisions were taken and announced "The decisions of the Nation against the occupation of the nation, the interim government for this purpose, which will be set up, and the mandate and patronage of the national assembly to be elected." 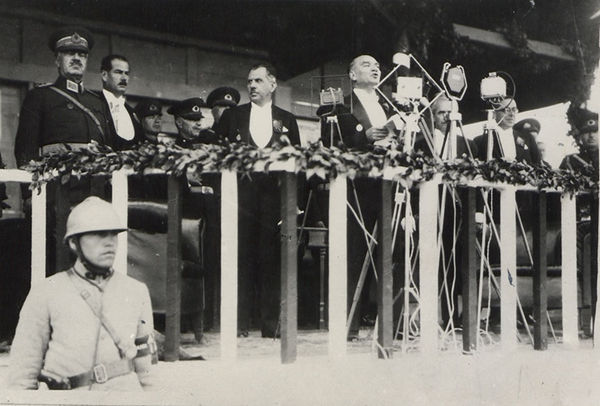 Turkey's Grand National Assembly (Parliament), his work began with a historic mission in Ankara on April 23, 1920. Mustafa Kemal was elected chairman of the assembly and government. The Sevran treaty, signed between the Ottoman government and the Antanta states, proclaimed to the world that the Turkish people had not accepted.

On April 6, 1920, after the order of Mustafa Kemal Atatürk, the Anadolu Agency (AA) was set up 17 days before the opening of the Turkish Grand National Assembly.

"Turkey to make its voice heard in the world", set up by the AA, has announced the first laws that Parliament's interests at all stages of the National Struggle and the Independence War Revolution have undergone a revolution. 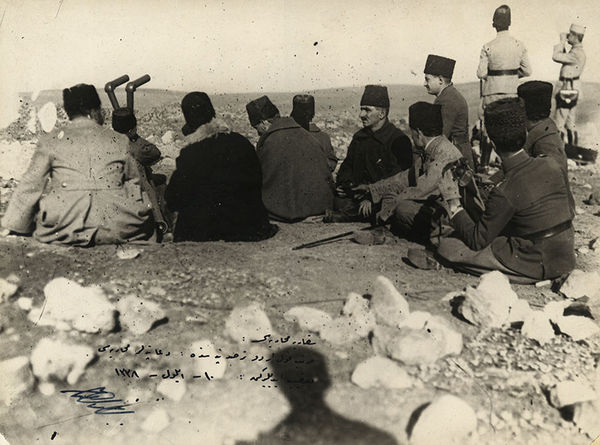 With the help of the Entente forces, in 1921, the premature reversal of the Greek-occupied Greek forces with the First and Second Inon battles was interrupted. The Greek army was attacked again on August 23, 1921, and the Turkish army, led by Commander-in-Chief Mustafa Kemal Pasha, won the victory of Sakarya's war. During this war, which lasted 22 days, the Greek army suffered heavy losses. At the Grand National Assembly of Turkey, Mustafa Kemal Atatürk received the title "Marshal" and "Gazi". On August 26, 192, the Turkish army launched a counterattack to save the country from hostile occupation. On August 30, 1922, under the command of a commander led by Mustafa Kemal Pasha, the Turkish army destroyed the largest Greek army. After the invasion of the Turkish army on September 9, 1922, enemy forces entered. On 11 October 1922, the Mudanya Ceasefire was signed and the Antenna States resigned from the occupied Turkish territory. 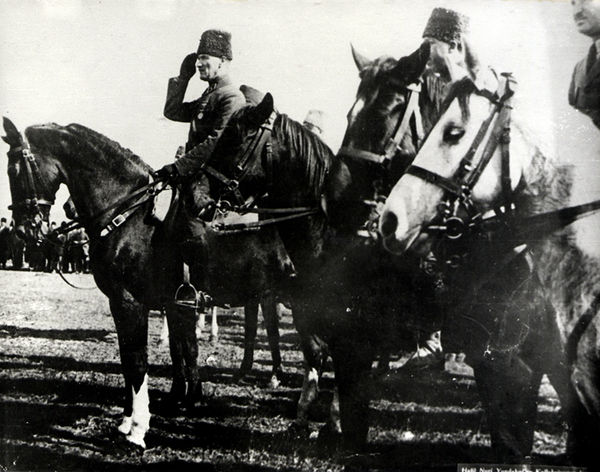 The founder of the republic Mustafa Kemal, in an announcement with Anatolian News Agency for an attempted assassination, "with a low disruption, we would rather holy the republic of my own person, and there is no doubt that he led our supreme principles that underlie them. My mortal body will be one day, of course. descend, but will stay in the Republic of Turkey forever. " he said.

Mustafa Kemal was given the surname ild Atatürk ve on November 24, 1934 by law no. 2587 and it is forbidden to use this surname. REGION AND WORLD EFFECTIVE IN TURKEY

In 1933, Mustafa Kemal Atatürk launched a five-year industrial plan to ease the effects of the 1929 global economic crisis and accelerate the country's development. Significant steps were taken in foreign policy during the same period; By introducing the people, the signing of the Balkans Pact, and initiatives such as the Montré Convention on the Straits Sadabad Pact for Turkey in the region, and has promoted excellence as an influential actor in the world.

Atatürk was intensively diplomatically trying to participate in his homeland, and his goal was in 1939 after his death. 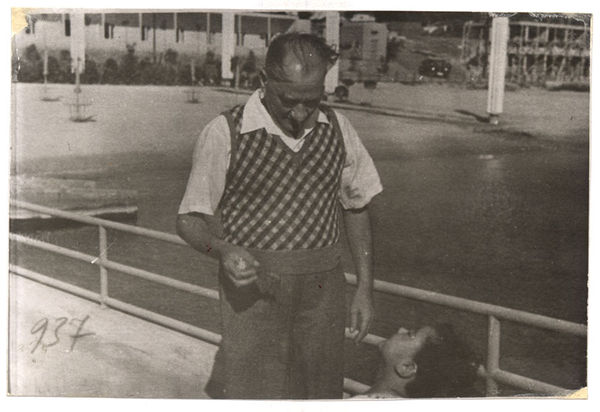 Not only as a commander who successfully led the Turkish War of Independence, but also as a public figure, Mustafa Kemal Ataturk spent 57 years in history and continuously working for the independence and happiness of his nation and homeland. triumphant

The founder of the Turkish Republic, the brave and unforgettable leader of Mustafa Kemal Ataturk, 80 years ago, nine watches in the Dolmabahce Palace died on November 10, 1938, on five lives. 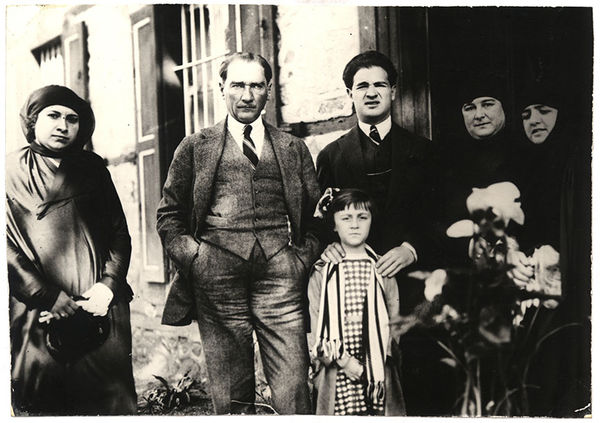