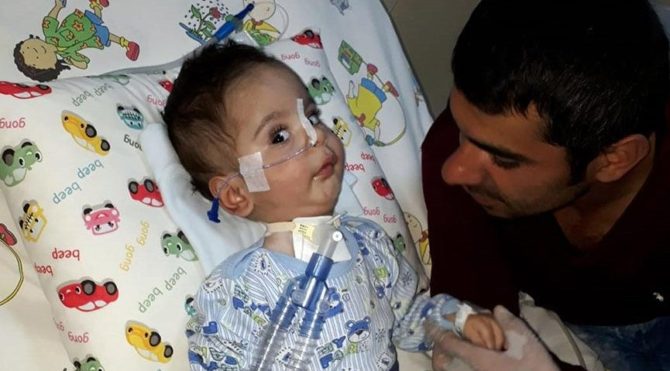 The only kid of Siva's family, 14-month-old Eimen Ali Aydin, was diagnosed with SMA, a condition known as Lung Infant Syndrome at 5.5 months of age. Eimens Ali, a child who has been ill in the intensive care unit for about 3 months due to illness requires a blower device and generator to continue home treatment. Waiting for support from the charity devices to take the Aydin family, opening to cut into a neck to their children, said the medicine would be cut.

Soner Aydın (26) and his housewife Esra Aydın (20), the only couple who were born before birth. Eimenam Ali, who had difficulty keeping his head after birth, was diagnosed with SMA (spinal muscle atrophy) 8.5 months ago. Olan Spinraza aza, one of the most expensive medicines in the world, was given by SGK. Following an improvement in treatment with Eymen Ali, lung infection was observed at the second and third dose after 3 months of the disease. Eimen Ali, who was hospitalized at the University of Kayseri Erciyes, was hospitalized at the Cumhuriyet University Hospital's Pediatric Intensive Care Service after 3 days. About 4 days, the patient needs £ 10,000 worth of ventilator devices to go home from the hospital to return to the house with the need to raise £ 4.5k. Eymen Ali's drug support will be reduced due to the CGC criteria.

A family that is not in good financial standing has been called by social media Eymen Ali. The sharing of Eimena Ali was repeated in social media and was shared thousands of times in a short time.

"PHARMACEUTICAL TYPE WITHOUT DECLARATION AN 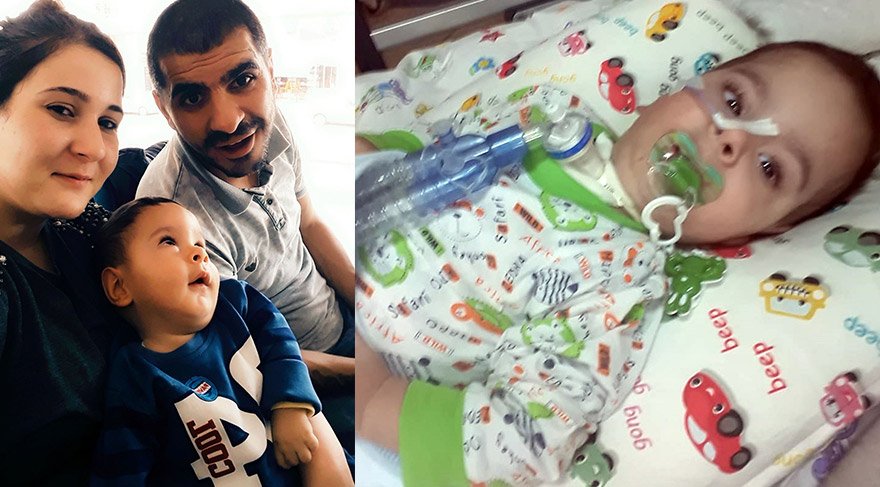 Father Soner Aydin said that I would call the officials of the Ministry of Health here, please hear our voice. SMA patients are abandoned. All patients are waiting for drugs, they are desperate. Two months ago, she breathed normally, now her throat has been pulled in to allow her to breathe freely. He had free oxygen, he can not pick it up now, he has to join the fans. Because her muscles melt daily. He needs fans, because his muscles melt. We want to use Spinraza without discrimination. The insurance corresponds to Type 1, and he wants the criterion. Unconditionally, unconditionally, we want our medicine. So far, our 3 doses were welcome. We reported on the fourth dose. At the moment we need a fan, we are thinking of getting our 5th dose. Because they want normal breathing support. The health ministry probably reduces our dose. The dose of the medicine is about 400 thousand pounds. We have nothing to do. We are finished with my wife. My child needs some machines to stay home. I do not have purchasing power because the prices are high. Fiyat

Mother Esra Aidina said that they had trouble and said that my son was sick since birth, we could not understand, he was born early. When genetic tests were performed, we learned that my child has SMA type 1 disease. We made drug candidates, drugs were too late. We worked with CGK for three months. She was 10.5 months old when she got her first dose. Good to bear She breathed herself, but after the use of the medicine it was a consequence. Since he was at the last stage of the SMA, he is not breathing enough. My child's need for a ventilator has evolved and is now in the Cumhuriyet University intensive care unit. My son is connected to the fan. Doctors say he needs a fan. If we can get out of here, we will come out with a fan, because without it, he can not breathe. So far my son was able to take medication and we reported our fourth dose. Drug support is now over. One dose of medicine is 400-500 thousand lira. We want to get medicine for everyone without a standard criterion. This is not something that can be measured with money. Give your children this medicine. We are asking the Ministry of Health. We melt every day, "today is today." Our child is ruined before our eyes, Ç he said.