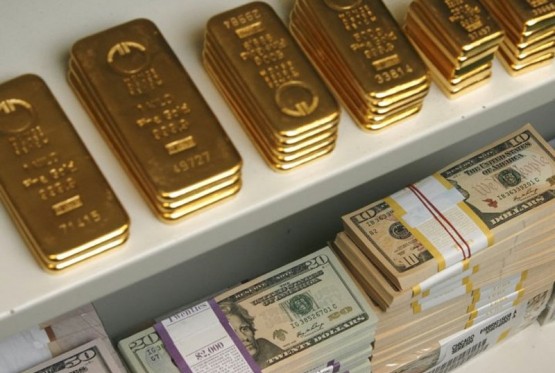 Central banks around the world have a golden stock as an alternative to the US dollar and Russia is at its forefront. This was facilitated by geopolitical tensions, war crimes and, above all, the desire for devolarisation.

World Gold Council (VGC) statistics show that demand for gold interbank prices in the first quarter of 2018 increased by 42%.

During this period, the central bank bought a record gold volume over the last four years, and it turned out that the Russian bank was the largest buyer.

Statistics show that the central bank bought more than 148 tons of gold in the last quarter, which is 22 percent more than in the same period in 2017. The absolute registrant is Russia, which bought 99.2 tons, with Turkey 18.5 tons.

In the modern history of Russia, for the first time, the state's gold reserves exceeded two thousand tons. The last time in Moscow was to be proud of the amount of gold in 1962 during Nikita Khrushchev's time.

Now Russia's share of global gold reserves is 17 percent, and Russian stocks are estimated at more than $ 78 billion.

The increase in gold reserves allows Russia to diversify its reserve currencies due to a deterioration of relations with the United States. Experts explain that gold is a one-stop protection against legal and political risks. In order to increase the share of gold in foreign exchange reserves, the Central Bank of Russia reduces the dollar and euro. The Russian authorities believe it is better to get more gold resources than dollars. Hypothetically speaking, if Russia has tons of dollars and the United States wants to harm its economy, this would be possible through currency manipulation, so it is a golden guarantee against such a scenario.

"This is a long-term strategy that is not relevant to the first year but is now quite active. In the past, we had hundreds of billions of dollars in US securities – more than $ 176 billion was invested in 2010, and now we have just over a dozen billion. We almost shut down this story, and as for the gold reserves, we increase it most. Fortunately, we produce ourselves gold and we do not import it, as some countries do, for example, Turkey imports a lot of gold from Venezuela. Gold is our stable resource, which we very good nourishment, "Russian politician Andrey Suzdaljtsev told Sputnik.

The central bank began selling US government bonds after the United States imposed sanctions on Moscow, and when there was a threat that Russia would be excluded from the international payment system, this year, for the first time in post-Soviet history, it exceeded China's gold reserves.

Otherwise, Russia purchases gold, which is mainly mined in its territory, and produces around 300 tons per year, and according to this indicator, it lags behind only China and Australia.