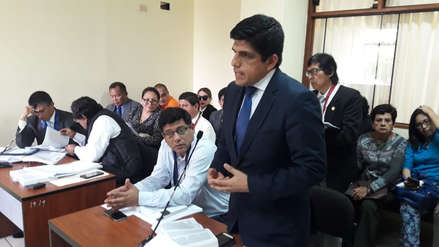 The Eighth Court of Preparatory Inquiry decided to extend the investigation to 21 lone bands for 12 months.The Wachiturros de Tumán & # 39;, including the President of the Peruvian Football Federation Edwin Oviedo as alleged by this criminal network leader.

Judge Carlos Chanamé ordered the investigation to be extended for another year, not three, as requested by prosecutor Juan Carrasco Millions from the specialized prosecution service against organized crime

During the hearing Carrasco Millions He argued that there are new elements of evidence in the present case and they are attributed to the investigation of seven crimes, including murder, an illegal association, among others.

Defendants' technical defense rejected this request because, according to them, they violated the right to defend their sponsors and it is doubtful that the prosecutor's office did not file a formal charge during more than three years of investigation.

Advocate, José Carlos Isla, legal protection Oviedo picchotito He argued that this extension did not affect his sponsors, as they were not notified, and in this case they were included.

Despite this, the prosecutor's office announced that it would appeal, as they will not be enough for another 12 months to investigate 21 defendants in this alleged criminal network.