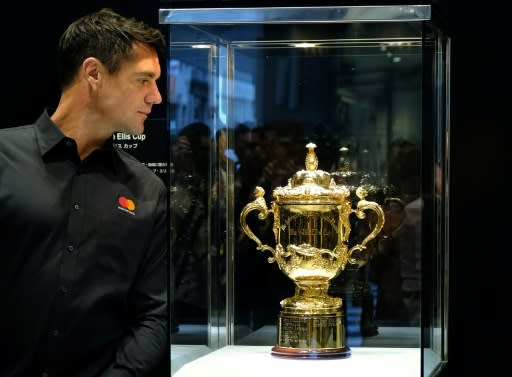 All black legends Dan Carter on Thursday waited for Japan to hit their World Cup quarter-round next year – and warned that young people in New Zealand would not have all their way.

The 36-year-old flagship party, who confirmed his uproar in Japan, reduced the curtain to his brilliant career, said that Brave Blossoms were able to reach a quarter.

"To do this, Japan will have to worry about a couple, but they are capable of," said a three-year world player who has signed an agreement with Kobe Steelers within two years.

"They have got teams, players, workout staff to exclude these shocks, and I would like to see them in the next World Cup."

To reach the fourth, Japan may have to fight one of the Pool A Six Nations heavyweights in Scotland or Ireland, but Carter said that the results of the week against New Zealand would give them hope.

The second rope All Japan was drawn by 69-31, but Courageous flowers played their game in a throbbing Yokohama game near Tokyo.

"Only a lot of teams can beat five attempts against all black people, so the Japanese team should be very proud of it," said Carter.

While All Blacks are greatly in favor of lifting their third successive Webb Ellis Cup, Carter said the form book did not accumulate.

"Just because you're in the first place in the world does not guarantee you're going to win the World Cup," he said, adding that many teams beat the next year's tournament.

"So, I'd like to believe that All Blacks will win, but you'll never be 100% convinced about that."

However, Carter turned his former side to have too many firefighters in England in this Twickenham this Saturday.

Carter was a global player in 2005, 2012 and 2015, collecting a world record of 1598 points in 112 tests, and this is the biggest gain in the Japanese local league after completing a three-year race with French side Racing 92.

Entering him in the mid-30s, Carter said his japanese odyssey would most likely be the last chapter in his senior career.

"I've been playing for 15 to 16 years. I have not decided yet until I'm ready to finish, but I think it would be a great place to finish my career," he said.

Asked if he could be tempted by coaches, he said that coaches "work harder than players, so it would be quite intense."

And while he said that he "could not imagine" a better place to live and play than in Japan, he acknowledged that the local language had caused him some difficulties.

"I studied French for a long time. I finally got a chance to speak a bit in French before I left France and then transfer it again to the Japanese, because the Japanese are" tres difficile "(very difficult)."

"Every time I do not speak English, I will return to French, but in Japan it makes no sense," he laughed.

New Zealand watched the third round after the World Cup