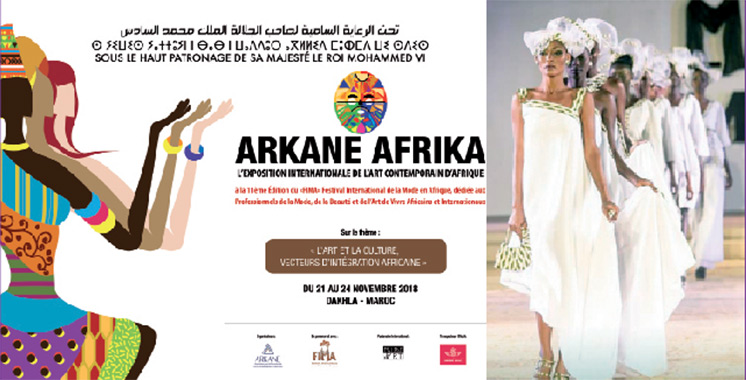 "The Fima city of Dahl is expected to have 30,000 visitors offering different views among African and Western creators."

The 11th International Fashion Festival in Africa (FIMA), which will take place on November 21-24 in Dahl, under the patronage of HM Kinga Mohammed VI, will be marked by the international contemporary African art exhibition Arkane Africa. The "Unpublished" exhibition, created by the Arkane Association for the Preservation of the Arts and Cultural Heritage, was initiated by the President of this organization, the Moroccan plastic artist Ouardane. "Arkane Africa is an art platform aimed at bringing African artists from the continent and the diaspora together, creating dialogue and promoting new creative contemporary initiatives"says the association.

In addition to this event that will take place at the forefront of Fima, this structure, which Throughout the year, many artistic residencies across Morocco are organized for promotion of the art of art and the preservation of intangible cultural heritage. "The fruit of these gatherings between approved artists and new young talents will be revealed to Ark of Africa with Fima", component structure.

About Fima, the same source points out that this is a multi-dimensional project in which cultural policy will be the theme of African fashion designers' parades and talent discoveries in the world of art. According to the promoters, "The 30,000 visitors expected in Dahl to Fima, which offers cross-referencing between African and Western creators." As a reminder, this first Fima edition in Morocco, which will celebrate the 20th anniversary of the festival, is organized with a sign. "Integration of Africa into strengthening cooperation South-South ".

And that's not all! In addition to the fashion show, Fima will host the first edition of the Haské salon, the originators of which, according to the promoters, are branding and future innovations, so the name Haské means "light" in Haos (Afro-Asia language). This exchange platform is organized in conferences and master classes. "Haskie will also be offering contemporary art exhibitions, artists' intersection, using two art showcases, whose exhibition "Arkane Africa "is part of", more about organizers. According to the same source, Salon Haské organizes a Hackathon competition devoted to fashion and beauty issues, highlighting Fashiontech and Beautytech's Made in Marocco. In addition, Fima will be lined with music concerts. What to satisfy many tastes.