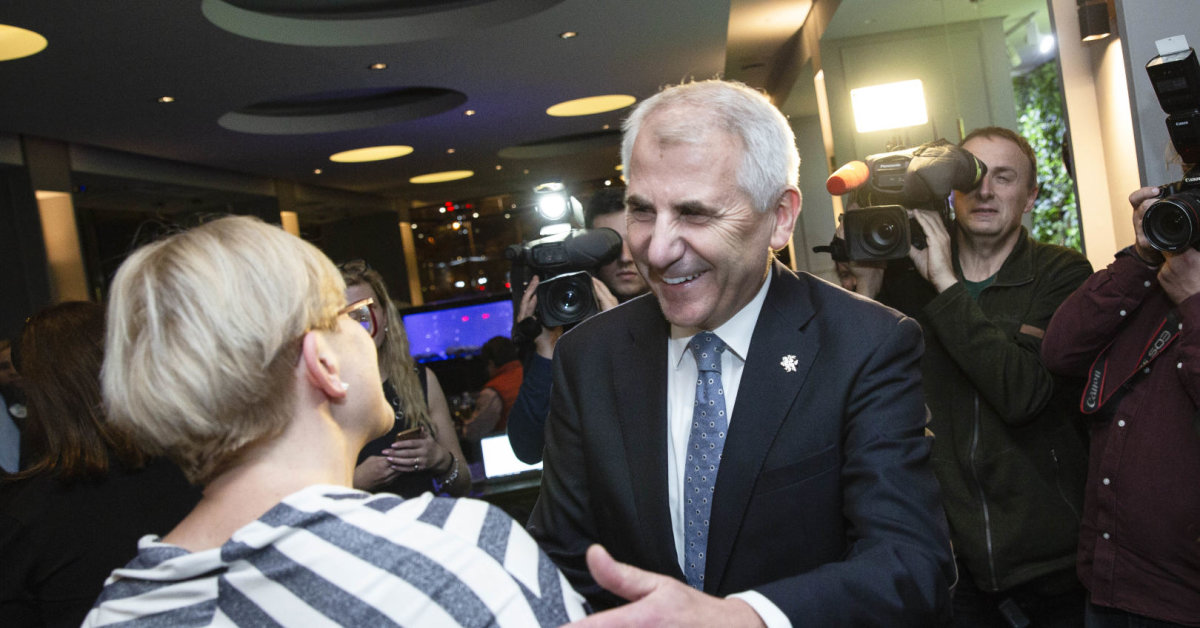 It is not clear whether Saulius Skvernelis will become one of the candidates, "socdemai" will announce their candidate next week, while Turkish leader Vytenis Povilas Andriukaitis said that Valdemars Tomashevskis is talking about opportunities. "The theme of the day" – Prof. SFE Public Communication Department. Laura Bielina and Vygaudas Ušackas, former ambassador of the EU to Russia, aiming to become a conservative presidential candidate.

– Good evening, Mr V. Usacki. Of the three of you, you are the most experienced member of the electoral campaign, because something like this presidential election campaign was in your life. Is it hard to stand?

V.Ušackas: This is a hard work, because it requires complete trust, requires your vision, excellence, leadership, and of course it is very important to have a good team that will help and allow people to reach, to clarify their own courts and to realize their vision.

– You have been traveling to Lithuania for several years and talking …

V.Ušackas: Yes, I deliberately spent a lot of years creating this network of friends and minded people, and they helped me a lot, but the result came out as it came out.

V.Ušackas: Thank you for the compliment, but you must ask the voters here. If seriously, observing and evaluating the current real candidates and seeing what is happening in the world, these shocks and the most profound changes I see is that none of the candidates is ready and lacks the competences that Lithuania needs in foreign policy matters and that without a doubt it will be one of the main problems. And people just appreciate it under the chest, pictures, some jokes. It seems that this is a manifestation of the maturity of democracy in Lithuania.

L. Bielinis: In the professional sense, he not only had, but also possessed these qualities, but if we look at the aspect of the election, then we really need to understand that competence is not competition, but in pictures. And work on his image was perhaps more intense and I do not forget that the image is mainly made up of the media, all of the media. In this case, my head was too weak, and this was a negative result for my result.

– What do you think with "picture"? No matter who you are, it's important how to submit yourself?

L. Bielinis: How did you imagine? You can submit yourself in a variety of ways, but imagine the videos that are transmitted for you, comments, rules, all speeches about you, not about you. The number of people talking about you is an image that forms in the voter's mind.

The elected person is actually very emotional. Most of them are very emotional, although we refrain from talking about themselves, Lithuanians, as emotional people, but we do not hide them. And we vote like this: "likes, dislikes", "likes, dislikes", "love does not love". And here it is aimed at the visual, not the fact that the person very clearly understands what to do, professionally assess one or the other. Most of the work was needed in this area.

– Mr. Vygaudai, how much work in this work depends on the party's husband? Is it possible to do this without a party – does it help in this case, does it hurt?

V.Ušackas: First of all, I agree with Lauri – I did not have enough time to create a visual image, and one of the lessons we have already created with this team – if I had more time, I think that I would be more successful in showing both excellence in management qualities and your vision. , the time was too short.

In particular, I am very interested in how the current poll leader G. Naused will follow the election campaign, because without a structure and without funding, which can largely be provided by a political party in accordance with the laws of Lithuania, then the most important thing during this time will be extremely complex. There are very strict sources of funding sources and, of course, a political structure that can help. I think that help, Ingrid will collect 20,000 or more signatures, Gitana will be much harder.

There are very strict sources of funding sources and, of course, a political structure that can help. I think that help, Ingrid will collect 20,000 or more signatures, Gitana will be much harder.

– This question is very bad for me – these signatures. I calculated that, according to the law, from 40 to 20 days, the candidate will remain, if we reject it, picking up the paper until it is distributed, while it is being collected, while it is being duplicated, for example, the month remains. 20,000 signatures are small to make sure you need 25,000 to 30,000. That means 1,000 signatures per day or over 7,000 per week. Is Mr Bielini really convinced that it is easy to nominate a candidate like G. Nausėda, who has abandoned all party support?

L. Bielinis: I think this is realistic, because now we see that G. Nausėda traveled to Lithuania for a year or a half or two a year and this means creating his own network. Perhaps this network has already been set up, supporters, sponsors, etc. have been created. Therefore, in my opinion, it has been agreed that I see systematic work, preparatory work, it is not an election campaign but preparatory work, and this is done to collect signatures.

– But G. Nausėda is one of them probably 5, probably from 7, who have all rejected, who do not belong to a party. Vygaud says he needs a lot of support. Why are candidates not so willing to party now? Has the party already discredited itself or has any other reason?

L. Bielinis: I agree that, by linking with the party, it is actually easier for organizations to organize elections, to participate in an organization, you will have an assistant, a sponsor that can do a lot for you. However, ties with the party together narrow the voter's attitude towards you.

I have said more than once that now I am only talking about I. Simonyte, because she has become a party candidate who binds herself to a party, deprives others of the opportunity for voters and reduces the ability of other voters to look at you as their candidate, as other voters they identify themselves with other parties, if not parties, are parties, ideological positions that are not conservative, Simon will be harder.

The fact that G. Nausėda refused to support the parties, on the one hand, loses organized support from a political organization, but gets wider opportunities to find their electorate.

The fact that G. Nausėda refused to support the parties, on the one hand, loses organized support from a political organization, but gets wider opportunities to find their electorate.

– Mr Usack, now everyone is very worried about what Mr Skvernel will do. Will he become a candidate for a farmer or not – everyone is considering. What does it look like if he stays in the last days when he can do that, or does such a tactic take him time? Of course, he comes from the positions of the prime minister, but again the collection of signatures, the means …

V.Ušackas: First of all, do not forget about the funds. Each candidate should try to collect about 1.1 million euros. This is not a small amount of money, and a party can grant it because it receives grants, contrary to the possibility for legal entities to finance campaign campaigns, etc. Now this is not the case.

Here, serious work, a person can be divided up to 8 000 euros if declaring income and property, if it does not exceed 10%. his annual income. Anyone who does not have a political party, supports financial, structural, it will be ready to go up Olives… According to Scvernel, Ramūnas Karbauskis decides on this and he decides what the party will support, as S. Skvernela will have the same dilemma – there will be no campaign if there is no support from the political party, and this will be determined by R. Karbauskis.

Karbauskis decides on this, and he will decide what the party will support, because S. Scvernël will have the same dilemma – there will be no campaign if there is no political party, and this will be determined by Mr Karbauskis.

– Can S.Skvernelis not be able to go? What do you think a farmer can do without him?

Think about our candidate and forget about others – this is a fairly normal election process, and in fact, or whether S. Skvernels himself will go, it will really depend on a number of factors. From the person's self-determination, from the situation in which he will become the prime minister, and from the attitude of the political party directly asking him to become a candidate. These are the three most important factors.

– Mr Bielini, for whom we have – now 7 words, we are talking about I. Simonit, G.Nausted and S.Skverneli, who have not yet begun. Do you see other threats from others so that they can claim?

L. Bielinis: I am all the rest, let them release me, but I see it as the background of the election campaign.

– The difficult thing is to predict. I really do not expect to predict myself, but the one who is right to predict is very good, we are trying to predict it. How do you think we can be the president of what we have now?

– But interesting. And if you hit, your chances will increase. Do you imagine that someone can now become the one who declared himself president?

L. Bielinis: Yes, I imagine others who did not come to the presidency, but not.

– Well, I will explain – from G.Nausėdas and I.Šimonytė in this case.

L. Bielinis: I think that today's most realistic candidates are those who are on this day.

– Mr Vygaudai, who are you?

V.Ušackas: First of all, I would like candidates to talk about very missing programs, their proposals, their vision and concrete plans, not about platforms for security and how to make Lithuania an economic breakthrough. And which of these candidates are actually potential presidents, I believe, I. Simonytė and the person who will support R. Karbauskas.

L. Bielinis: He said that the conservative would support it and it supports …

– Mr Vygaudai, does this mean that everything is happening with your presidential election?

– But there are two more elections – the self-government and the European Parliament. Do you see yourself somewhere?

V.Ušackas: No, I do not see it

V.Ušackas: No, I really do not see.