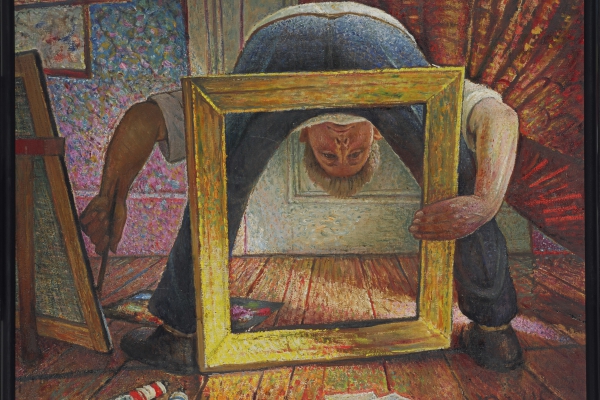 The story "Face-to-face: the brightest portraits of the last century in the art of Latvia" tells the story of the artist Auseklis Bauschenekis – an artist whose life lasted for almost a century and whose peculiar portraits form an integral part of the art of the second half of the 20th century in Latvia.

"I believe that Auseklis Baušķenieks is one of the most original Latvian artists, because his language of expression is not like anyone. His peculiarity is clearly visible and indisputable, "emphasizes art scientist Diana Barčevska.

Until the end of February next year, the Latvian National Museum of Art will host an ambitious exhibition of portraits that brings together a selection of brightest portraits of Latvian artists throughout the century, with more than a thousand work in total. But Latvian Radio continues to introduce you with a selection of ten portraits from this exhibition.

Barchevsky highlights the skill of Baušķenieks in his works to delicately speak the language of Aziz or "between the rows". "It was very difficult for the Soviet curators to deal with him, because he had such a playful expression, and the paintings somewhat resemble humoristic illustrations. And it's like disarming viewers and art censors. But at the same time, it's clear that there is something said more than just what we see, "says Barchevsky.

The painter's "Antipasportress", painted in 1969, is a good demonstration of his hooligan daring, which at that time was not so characteristic of so many artists, the researcher said. "Baušķenieks has turned to us in this work, has put his head between his legs and looks at us through an empty painting frame. This posture is a good demonstration of the fact that he is able to look at situations, in life, in art completely out of proportion, from the "wrong" side. It characterizes his way of thinking, which appears in paintings. He is an expert who cooks with us all the time. However, when learning his art in the broader context, it is clear that he is a thinker. He portrays his age, and there is much almost infinite critical intonation. But not in such a mess, but through joking and ironizing for many negatives. And this, of course, was the way in which he could exhibit his works at exhibitions, because Soviet art criticism was already very careful that only art was not critical of Soviet power. Consequently, many of his works, while being, however, became part of these shows. I think that's why the people also loved her, because he was a voice of the people who allowed him to say what everyday people did not relish in public, "says Diana Barčevska.

However, Auseklis Baušķenieks himself, in an interview with the Latvian Radio journalist, art historian Aija Osa, in 1986, rejects the assumption that his art is deliberately ironic.

"I do not agree with this approach that I would like to ironise something. Maybe it comes out what can be done there. Just with my eyes and ears, I live with life, see what happens and how it affects my ability to portray. I do not like the beautiful clouds and the fallen leaves, although there are some pictures for me too. I like the events, the environment and the circumstances in which I live, and I want to show it, "said Baušķenieks.