At the First Session of the 13th Saeima, the seats in the Presidium are split up – "KPV LV" and ZZS / Article / LSM.LV remain vacant. 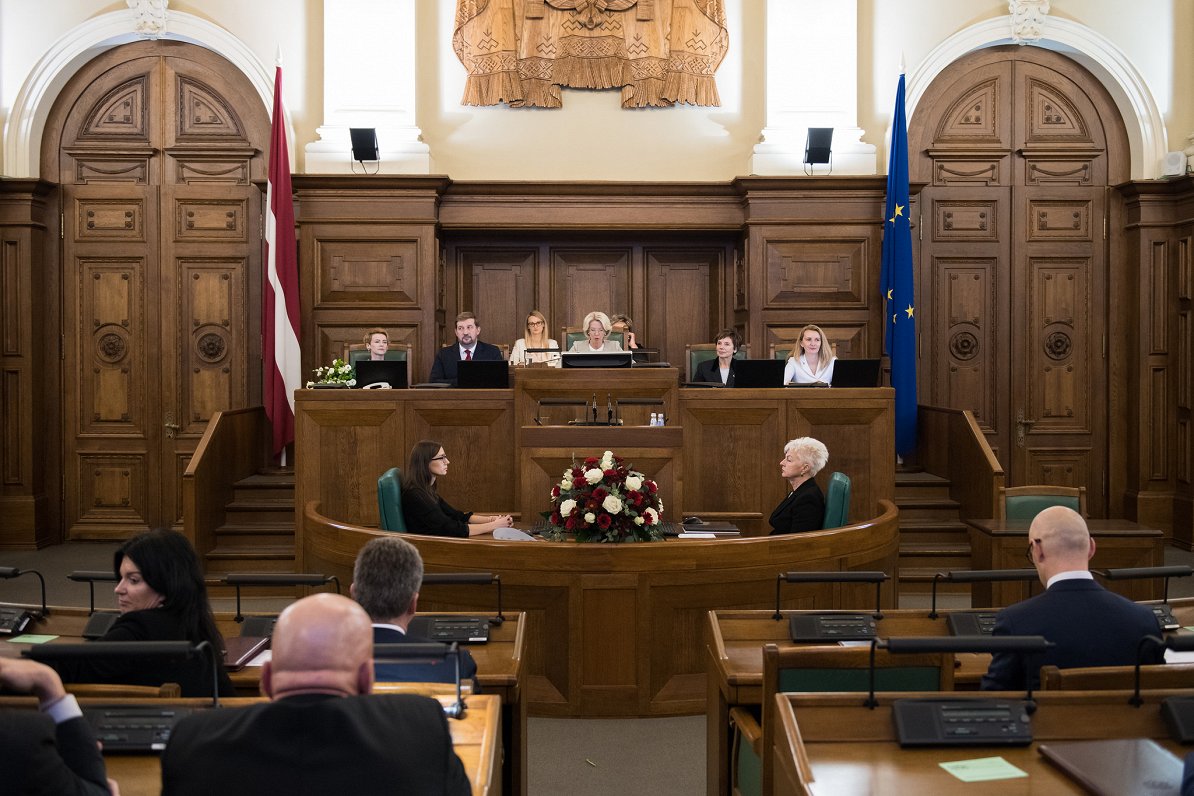 Inna Lībiņa-Egnere, the representative of the New Conservative party (DK), Dagmar Beatnere-Le Gall and New Unity, was elected on Tuesday, November 6, by the members of the 13th Saeima chairwoman Ināra Mūrniece (NAC). In turn, Andrejs Klementjevs ("Harmony") was elected to the secretary of the Saeima, but for his members – "Development / For!" deputy Mary Golubeva. Consequently, "KPV LV", as well as the Union of Greens and Farmers, remained in the Presidency without a post.

Gunars Daudze (Union of Greens and Farmers (ZZS)) and Artuss Kaimiņš ("KPV LV") also nominated a deputy chairman of the Saeima. About 34 parliamentarians voted for a lot, but 31 members were neighbors.

Subsequently, Klymentyev's "Harmony" was elected to the position of the Saeima secretary. 55 were voted for him, but 32 were against. In turn, the "Development / For!" Association was elected for its member with 64 votes. deputy Mary Golubeva.

Consequently, the political party "KPV LV" and ZZS will not be represented in the 13th Saeima Presidium.

Commenting on the Saeima vote on the two new members of the Bureau, Artušs Kaimiņš stated that "KPV LV" was punished in this way: "We were sold for the fact that we will keep our word and support Dagmar Beitner-Le Gall in the position of the Saeima. Understanding that they miss the vote for Mrs. Mūrniece, the National Union has agreed with the "New Unity", "Development / Par" and ZZS on this support for the boss on this place in the presidency. In its turn, KPV LV has been fined. It showed us our place. We are a party that has won the right in the right flank. The voter has made his wish. For the first time, I see that the right-wing party who has won the election will not be represented in the presidency. The translation is as follows: there is no new presidium. There is the old Presidium with one new member, Beitner Le Gall and Mary Golubev. The message is: "Development / For!", "New Unity", National Union and ZZS are working together. "

In turn, Andrei Judin, a deputy of the New Unity, believes that the majority of the Saeima supported the representative of his association to Inesi Lībiņš-Egneris as a Saeima member of the Saeima, as she has more experience. But against the other candidate, namely the representative of the Party "KPV LV", Artusa Neighbor worked on the impression of his work in the previous parliamentary term.

On Tuesday, November 6, the NA Speaker Mūrniece was elected chairman of the 13th Saeima. 13 members from the "Development / For!" Party, 12 from the National Association (NA), 10 from the Union of Greens and Farmers and 7 from the "New Unity" supported the bailiff's candidacy. 22 parliamentarians did not vote from "Harmony", but Janis Duklava (ZZS) election ballot was invalid.

Parliamentarians also approved the powers of the allies of the 13th Saeima on Tuesday. The first sitting of Parliament ended with the announcement of the current Cabinet of Ministers mandate. Existing ministers will continue to work as a technical government.

In total, in the 13th Saeima there will be seven factions – Harmony, the New Conservative Party, the KPV LV and Development / Par!, The National Union, the Green and Farmers' Union, and the "New Unity" faction.

Even on Monday, the eve of the newly elected Saeima, MEPs did not agree on the composition of the Saeima's Presidium. There has also been no agreement on the formation of the government.