Maneuver, Europe is working on a "reasonable" procedure against Italy 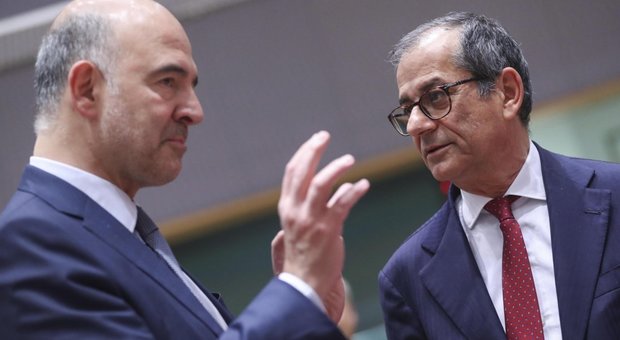 Find the "acceptable" way to launch an excessive deficit procedure against Italy. This is the objective that all Eurogroup countries have fully supported the work that the European Commission has to take. It was obtained from European sources during the Eurogroup meeting.

The comparison between Economics Minister Giovanni Tria and his Eurogroup colleagues has been calm and the result is that there is now a phase of confrontation with the European Commission in order to find a compromise on the 2019 Budget Law. Italian finances were informed about the meeting of the Ministers for Monetary Union in the Italian case. The Treasury is not unbalanced on the content of a possible compromise: according to the same sources, Tria has defended the government's maneuver, explaining Italy's point of view: that there is a deviation from public accounts, but not serious. According to the Commission, "it is unprecedented" and "serious".

However, tensions in Europe with regard to Italian maneuvers remain high. "Our position on Italian shunting was clear from the outset, we expect these rules to be respected," because the EU "needs a fair and uniform approach to these rules." Thus, the Austrian Minister of Finance Hartwig Loeger is arriving today in the Eurogroup. "I hope the Minister Tria will provide additional information nowadays," and maybe we can understand the Italian idea, "he added, hoping for a" response "from the Commission." It's time to see the 13th year to see Italy's answer. "

"I am afraid that the Italian government's approach and measures put at risk these goals for the completion of the euro area architecture," this is my concern. So, the Slovak Finance Minister, Pēteris Kazimir, after arriving in the Eurogroup, said: "It's just enough that Giovanni (Tria, ed) is well-known what the situation is now. "" I am convinced that we are part of a rule-based club, which is being implemented by the EU Commission, and the Commission must be fully supportive, "he added.

"I do not have this kind of information" that Italy will not give the EU Commission any answer for a new budget, "my negotiator is Minister Tria, and I am convinced that he understands the need for Italy to act in accordance with the tax rules of Europe." So the EU economic affairs Commissioner Pierre Moscovici will arrive at the Eurogroup meeting in Brussels, where a debate on Italian maneuvers will take place. And it is precisely the EU's focus that the budget law will start its work tomorrow, Tuesday, November 6, in order to reach the final end by the end of the year. There are still many nodes that will be eliminated in the parliamentary debate that promises to act.

Prior to launching the Eurogroup meeting, Tria had a bilateral meeting with Moscovici today. The first test, which will be an opportunity for the euro area finance minister to formally discuss the Commission's decision to reject the budget planning document adopted by the Giuseppe Conte government. Tria spoke with the Commissioner about an hour after the Italian financial maneuvers and the Commission's requests to comply with the provisions of the Stability Pact.

For the people of Italy, I do not think that the maneuver is good, "because if the result is an increase in debt, it will eventually be the poorest to pay, so it's not a good budget for people," said Moscovici, convinced that Tria understood that Italy should act with the rules, "but he needs to do that". Regarding the argument put forward by the Italian Government, namely that the expansion of the budget will lead to greater economic growth and a reduction in the debt-to-GDP ratio, the Commissioner said: "I will be diplomatic: it does not necessarily mean more money to get you more growth and lower debt. that this is an economic justification we must discuss. "

"Freedom of thought is important, but I expect the European Commissioner who is very cautious in making statements that have a clear political significance. I want to speak in the relevant forums and I do not even want to believe that the Commission will be affected by political arguments," Prime Minister Giuseppe Conte said a press conference with Algerian Prime Minister Ahmed Ouyahia in response to the Moscovici statement.