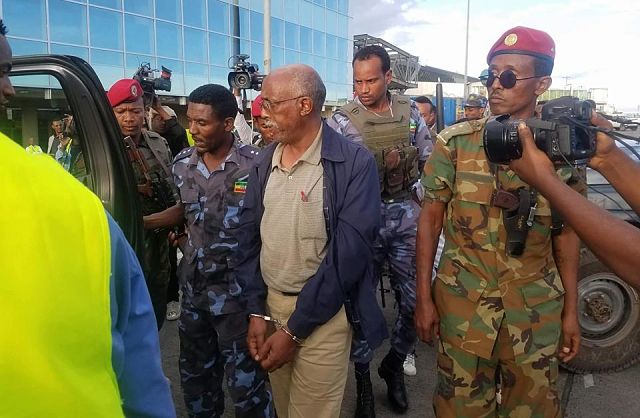 ADDIS ABABA, Ethiopia-Ethiopia, has arrested the former head of the former conglomerate of the military industry, one day after a national lawyer discovered that several hundred million dollars had been taken out of the company.

The national broadcasting company ETV announced that the military general, Kinfe Dagnew, a former head of the Metal and Engineering Corp., was arrested at the Sudan border, where he tried to escape.

The arrest is considered to have a direct impact on the Ethiopian military, the latest of a series of significant changes implemented by the reformist prime minister, Abiy Ahmed, 42, since he assumed power in April.

The former officer portrays images of rockets arriving by helicopter in the capital city of Addis Ababa, broadcast by a public broadcaster several times. The news of Kinfe arrests has captured many people's attention in this East African nation, as he was one of the most feared figures in the country a few months ago.

"He was a dictator who did not want to solve our problems," Desalegn Kebede, who worked with her, told the Associated Press. "I am very glad that he is now guarded. We hope he will get what he deserves."

Ethiopian prosecutor Berhan Tsegaye said on Monday that 27 of the corrupt arrests were arrested from a military company. He argued that purchases were made at around $ 2 billion without an open call for tender.

In addition, 36 people were detained for alleged human rights violations.

The former government of Ethiopia, which is a secure security of the Western Union, often accuses violations of international groups and activists' rights. Abiy's new government has made several reforms, including releasing several thousands of political prisoners, allowing opposition groups to return from exile, expelling terrorism from prominent opposition leaders, and easing restrictions on the media.

But ethnic clashes are still occurring in some parts of the country, and they are the most serious threat to Ethiopia's 100 million people.

A large-scale arrests in recent days are the result of Prime Minister Abyan Ahmed's order following a month-long investigation into the failures of the previous government.

In his opinion, some of the arrested are accused of being an incorrect state military corporation, Metal and Engineering Corporation, who was plundered into a multibillion-dollar corrupt scheme.

Berhanu also said that the head of Ethiopian ex spy is suspected of involvement in an attempt to kill a new prime minister in a rally on June 23rd. Although other detainees have escaped from the country, the former intelligence leader now lives in northern Europe and needs to take power, he said.

Opposition counter Yilikal Getnet told the Associated Press that the company had requested the arrest of former officials.

"These have been issues that we have repeatedly called for in the opposition," he said, adding that Ethiopia needs a truth and reconciliation process to investigate past missions. "Only the ruling party alone can not justify all of this early atrocities."

According to the previous government, Ethiopia, a closed-air security ally of the West, was accused of violating the rights of human rights defenders. Since April 42, Abia accepted the government in April, his new government has freed several thousands of political prisoners, allowed expelled opposition groups to return home, expelled terrorism against prominent opposition politicians, and allowed the media to operate more freely.

In spite of the reforms, Ethiopian parts of Ethiopia continue ethnic clashes, and this poses the most serious threat to Abiy's leadership in an East African country with 100 million lives.

"These arrests are an important first step in ensuring full responsibility for the abuses that have been compelling this country for several decades," said Joan Nyanyuki, Amnesty International's East African Head of Africa. "Many of these officials were in charge of government agencies that were sad about serious human rights violations, such as torture and arbitrary detention, including in secret rooms. We urge the government of Prime Minister Abija to take further steps to ensure fairness and responsibility for all previous human rights abuses and while at the same time ensuring that all people arrested receive fair trials. "