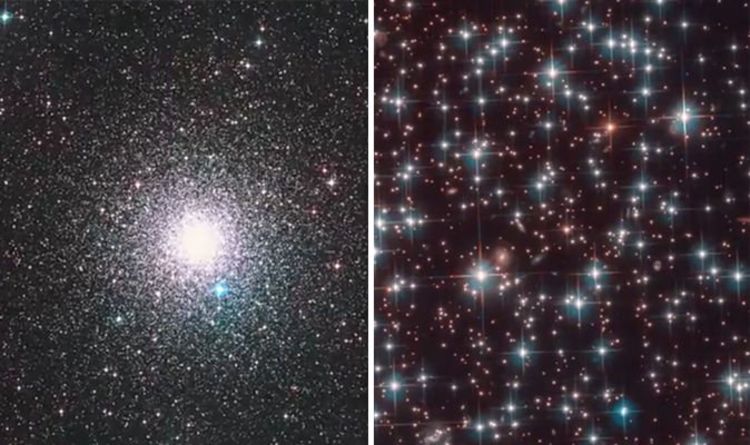 Astronomers have discovered that the galaxy is about 13 billion years old – almost as old as the universe. The small galaxy, described as 'living fossil', was in the global cluster NGC 6752 using the Hubble Space Telescope. NASA's amazing shot shows that the camera brings the tiny galaxy called 'Bedin 1', surrounded by thousands of dazzling stars. The Hubble Space Telescope team initially planned to determine the age of the global cluster by measuring its weaker stars, but eventually came to a small galaxy.

Despite dwarf spherical galaxies, which is a common discovery, Bedin 1 is unique from others.

Hubble said: “Although dwarf spheroidal galaxies are not unusual, Bedin 1 has some remarkable features.

“It's not just one of the few dwarfs who have a well-spaced distance, but also very isolated.

"This makes the smallest dwarf galaxy discovered so far possible."

The team added: “The discovery of Bedin 1 was a truly sincere discovery.

"Very few Hubble images allow you to observe such weak objects and cover only a small area of ​​the sky."

For almost 30 years, NASA's Hubble Space Telescope has been an unknown and infinite universe.

Since its inception in 1990, Hubble has consistently provided iconic images of the universe, allowing us to better understand the infinite space.

The NASA's eye in the sky has now revealed its most serious image so far, omitting the deepest image of the universe.

The Hubble Space Telescope, led by the US Space Agency NASA and the European Space Agency (ESA), has once again provided an amazing space view.

HUDF is a small space image of the Fornax constellation that is believed to contain about 10,000 galaxies.

Researchers at the Instituto de Astrofísica de Canarias (IAC) in the Canary Islands have processed a number of Hubble images to reveal a revised image of the universe.

IAC researchers said: "The recovery of this light, emitted by the stars in these outer zones, was equivalent to the recovery of light from a full galaxy."

Alejandro Borlaff, project manager at the IAC team, said: "What we have done is return to the original image archive, as Hubble observes, and improve the combination process.