Family at the forefront of global pancreatic cancer »J-Wire 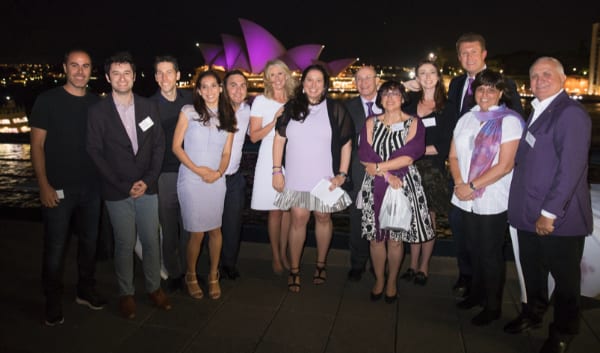 Read about the article

On Thursday, November 15th, the World Pancreatic Cancer Day will bring together people around the world The demand is betterSM the fight against pancreatic cancer, starting with an understanding of the symptoms and risks.

The annual one-day campaign is the World Pancreatic Cancer Coalition, which involves more than 70 organizations from 30 countries.

One organization is the #PurpleOurWorld, a family-based social media movement that aims to raise awareness of pancreatic cancer. #PurpleOurWorld is one of the five coalition Australia members.

#PurpleOurWorld was founded by Daniel Goulburn, his daughter Sara Kahn and Jessica Abelsohn, and sisters Isabel Kirsh and Ruth Nissim, in honor of their wife, mother and sister Rochelle Goulburn, Moriah College teacher for over 30 years. Rochelle left pancreatic cancer in August 2014, 16 months after diagnosis, which is unusual, given that the average survival is only six months.

#PurpleOurWorld is at the forefront of the global campaign with the role of Jesse Abelson in the World Pancreatic Cancer Day Committee and the recent appointment of Daniel Goulburn in the Steering Committee of the World Panel on Cancer.

Goulburn is also the current President of the Wolper Jewish Hospital and has been serving the Council of Moriah College for several years. Currently, he is the head of the life of the College and a trustee, and co-chair of the Australian Jewish School Council.

"I am deeply honored to be appointed to the Steering Committee of the World Pancreatic and Post-Cancer Coalition, representing #PurpleOurWorld and other members of the Australian members," said Goulburn. "The nine-member steering committee is composed of representatives of the United States, United Kingdom, Canada and Europe. The Committee supports the coalition member organizations from all over the world on a very difficult task to create the much needed understanding of pancreatic cancer, the most terrible and tragic cancer."

Every day, nine people in Australia will be diagnosed with pancreatic cancer and about eight will die of this disease. Pancreatic cancer is the lowest survival rate among all major cancers, and in almost all countries it is the only major cancer with a one-time five-year survival rate. In Australia, the survival rate is currently less than 9%. These chilling figures are not just statistics, they represent family members, friends and colleagues around the world.

"Pancreatic cancer is a silent killer. Symptoms are so vague and often that they are rarely diagnosed early enough to carry out an operation that is the only treatment for the disease," explains Abelsohn. "The World Pancreatic Cancer Day Campaign focuses on the need for better patients, allowing us to raise awareness about the disease, which includes a better understanding of the symptoms, because it is an early detection key."

There is currently no standard screening test or early detection method for pancreatic cancer, although studies are being conducted in these areas. It is very important for those who see signs or symptoms of pancreatic cancer to listen to their bodies, pay attention to medical attention and, in talking to their healthcare provider, to mention pancreatic cancer. Studies have shown that patients diagnosed during surgery will most likely survive for five years or longer.

#PurpleOurWorld has partnered with corporate organizations such as Westfield, Ramsay Health Care and the Insurance Australia Group to increase the profile of the disease. For the fourth consecutive year, Gelato Messina will also create one of their "qualities" in the week on World Cancer Day.

"#PurpleOurWorld has really grown over the last four years," says Abelsohn. "Our motivation will always be a mother, we will continue her voice. However, #PurpleOurWorld is now so much more. We have campaigns for every other family that goes through what we've been through. We are campaigning for families to have another day another month, another year with your loved ones. "

#PurpleOurWorld, together with the World Panel on Pancreatic Cancer, calls on the public to take action to raise awareness of this deadly disease. Just carry something in purple and share the social network image using hashtag #WPCD.

If you want to understand more about the symptoms and risks of the disease, please visit worldpancreaticcancerday.org for more information.

Visit the J-Wire landing page for everyone latest breaking news, gossip and what's happening in your community.