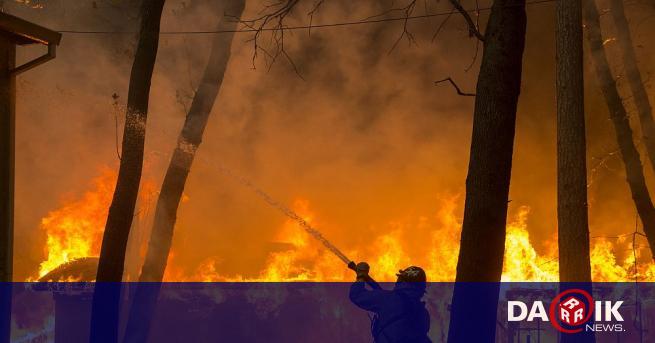 
Singers Lady Gaga, Iggi Azalia and Cher, director Guillermo del Toro and reality star Kim Kardashian are among the celebrities who escaped from their homes Malibu to a fire in California's Ventura district, reports Reuters.

Twitter wrote to Giermo del Toro that he left his "Cold House" in his villa, his great collection of books, monster, costume and film making. "A cold house and a collection may be in danger, but I keep a gift of life," wrote Oscar winner, "I'm worried about my house, but I can not do anything," Sher wrote in Twitter. "Friends' homes were burned."

The forest fires in California are rising

Evacuated last night. The Bleak House and collection can be endangered, but life's gift stays. Thousand Oaks and Agoura are still at risk. Malibu is evacuated.

Singer Iggy Azalia and actress Alisa Milan also wrote her own home. Singer Melissa Etheridge said she moved to the hotel.
Yesterday an order was issued for the mandatory evacuation of 12,000 Malibans. Nearby Calabasas has hundreds of celebrities such as Barbra Streisand, Tom Hanks, Judd Apatow, Britney Spears.

I mean so deeply to anyone who today suffers from these unhealthy fires and mourns to lose their home or loved ones. I was sitting here with many of you wondering if my house would split the flame. All we can do is to pray together and to each other. God bless you.

Thank you to the firefighters, the police, the first and emergency helpers about what you do, beyond what you can do to help us. You are really heroes. #CaliforniaFire

Lady Gaga also wrote to Instagram that she was being evacuated from Frank Zappa's mansion, which she bought, announced Contactmusic. She also publishes pictures of how her neighborhood jumps to cars against the nearby smoke-fired background.

Many residents have asked for help to evacuate horses and other large animals. Alice Milano, who appeared on the road to sexual harassment # I also ask for help from the five horses to leave the neighborhood.

Actor Charlie Sheen wrote to Twitter that he was worried about his father, Martin Sheen and his wife Janet, who lives in Malibu, because he could not reach them. Martin Sheens later assured his children that he was good.

Caitlin Jenner also testified to her followers in Insagram that she was safe after being told that she had a fire in her home.

I heard that the flames have reached our property in our homes at Hidden Hills, but now they are more decorated and are now stopped. It's not like it's going to get worse now, I just ask that the winds be in our favor. God is good. I just ask everyone to be safe

Firefighters, I love you and thank you for doing everything you can to keep us safe!

Kim Kardashian and her sisters, Clowe and Courtney also had to leave their homes in Calabasas.