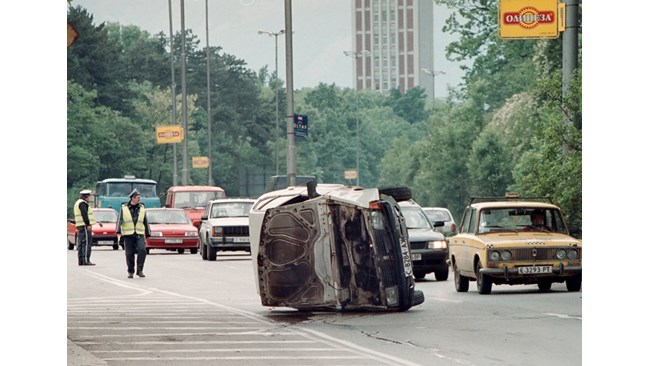 Crash with killed = the most expensive rack for the guilty driver

The smallest penalties are for forward gas

And driver's cars that have accumulated great traffic disruption will be more expensive third-party liability insurance.

This provides for an order that the Financial Supervision Commission proposes for public consultation.

The class that assesses the risk will receive not only the driver, but also the car. If sold, but owned by a non-disciplined manager, the new owner will have to pay more expensive policies, even if they are not distorted.

The text is proposed to avoid insurance fraud cases when a car is sold fictitiously to exclude expensive insurance, and then used by the previous owner, said FSC Deputy Head Vladimir Savov. (See below).

The competitions mention that disasters involving killed or injured people, as well as escape from the crime scene, are the worst offenses in the Bonus-Malus system.

They have 19 punitive points, which sends the driver directly to the most dangerous category. This would make his policy more expensive than 400%.

The project was adopted by the Financial Regulator at first reading. He will be

shall enter into force

after the debate and

before the final vote.

The smallest are speeding penalties 10-30 kilometers away from settlements.

From the beginning of the system from January 1, 2019, all drivers, owners and cars will get elementary school – eighth. This means that next year, policy costs will be the standard that most companies expect to move around 300 levs.

If the owner of the vehicle has not caused a road traffic accident within 12 months, next year he will be in the lower class and will receive a 10% discount. Then then

the price slows down

The benchmark for road traffic violations punctuates and pays more insurance is much faster – 10 to 12 degrees the price is added to 10%. A 30% shelf between classes 12 and 20 is higher.

However, every year without a violation, there will be only one bonus point. Thus, unskilled drivers will take years to return to standard insurance rates.

– Are the drivers who buy a car with many violations, Mr Savov?

– Why is this provision in place? Should not these righteous leaders be punished for other offenses?

– The bonus-malus class transfer rule is intended to restrict the system from being circumvented as a vehicle with infringements committed by the owner, fictitiously transferred to another person with a clean driver history, and then the old owner continues to use this car. An additional result, which should have a deterrent effect, is that it will be difficult to sell cars with many violations, while their owners will still have to buy their insurance. All of this should create motivation for prudent driving and avoid disturbances and accidents. In addition, given the fact that the offenses committed by other people will affect the car's class, the owners of such cars will have a motive to be careful about what their cars are and what they do not recklessly do.

– Is there no more favorable class for transfer?

– Are any Malus or Bonus Points accumulating?

– the project provides that each offense has separate points about Malus. This means, for example, that every time a speed violation occurs and is punishable by a sanction or a special seal, the score points are charged so many times.

– And when is the maximum reached?

– At the same time, if a minimum or maximum scale level is reached, more points are not accumulated. As the Draft Order provides for the creation of a mechanism that encourages drivers to show risk-free behavior on their roads, without creating artificial comfort in pooling too many bonus points, and preventing people from returning lower bonus rates.

– Explain with an example.

– For example, if a person has reached grade 1 for receiving a bonus and has been in this class for several consecutive years, he / she will have to pay suitable punitive points when driving a car in case of an accident or administrative violation. Accumulation is not intended to allow drivers to drive their cars in good faith and I do not believe that the accumulated bonus points can be run poorly. Similarly, when a person reaches the malus of the 20th grade, he usually needs 12 years to return to the base 8th grade and 19 years to reach the most privileged 1st class. In the event that new points accumulate malus, in essence, Malus classes can become endless, and therefore the person has no motivation to correct their behavior as a guide.

– How is the case with leasing cars resolved?

– The project stipulates that the highest bonus-malus class than the motor vehicle or the lessee – a natural person recorded in the vehicle registration certificate applies if the vehicle is used by a leasing contract. For example, if the leasing vehicle is new and applies to the basic grade, but the lessee is in the Malus Group 12, then the higher grade 12 is applied to the insurance policy.

– And in a car with many guides?

– In this case, the accruals accrued by each driver will affect the car bonus premium class. However, if some drivers are owners, insurance will also carry their own class if it is higher.