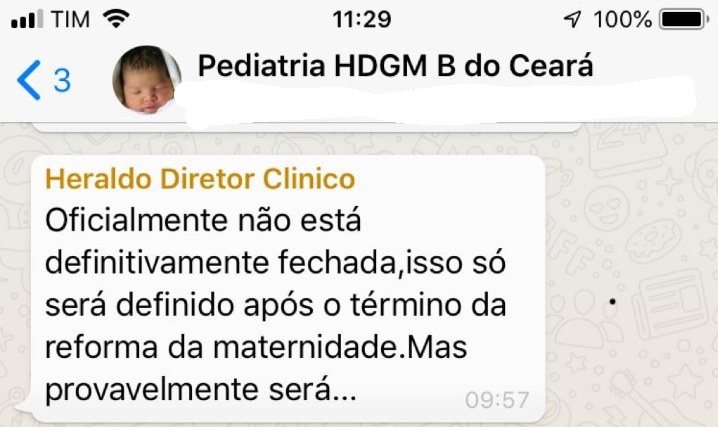 Pediatricians at the Gonzaga Mota District Hospital (Gonzaguinha) in Barra do Ceara state that the child's emergency situation in this area may be closed. According to the Ceará Doctors Union, officials working in the unit received a notification using the WhatsApp application on Tuesday, September 6th.

Syndicate also said that it plans to meet with the hospital's clinical management to clarify the case.

According to the Health Secretariat, it was forbidden to retire in the emergency pediatric and other hospital sectors, but this does not indicate that the activities will be closed permanently. Moreover, he adds that all calls from prohibited sectors have been transferred to nearby entities.

Edmund Fernandes, president of the association, reports that he was warned that a reform of the hospital will begin in July this year. The alert has already indicated that the child's emergency situation is closed. "I demanded a meeting with the hospital management, which informed that the industry would not end but would be complemented by the reform, and after the completion of the work, the visit would return normally," he said. According to him, the renovation was scheduled for a month, but it is still ongoing.

Even so, according to the president, local doctors received a statement on Tuesday that the emergency would actually have ended. Pediatricians should be transferred to other hospitals. "In recent years, we have participated in public hearings, which have called into question the decline in the number of pediatric beds, which is an unprotected part of the population, but they are seeking an emergency situation that should be extended to reform," he says.

Pediatrician Vladiya Sampaio Hospital has been working for about 10 years and was one of the female employees who received messages from WhatsApp. She says the alert was sent to Heraldo Cavalcante, Clinical Director of the Hospital in the local pediatric reports group. Moreover, even planning to set up a new children's hospital, Gonzagainha could not close the emergency before this new location was ready, "he said. It was disorganized as they announced.

Officials said the warning said the hospital's emergency would be restored on the 19th of this month, but the pediatrician is still closed. Hospital could be disabled. "It is not officially concluded, it will be determined only after the end of the maternity reform, but it will probably be," said the text.

According to the clinical director's report, the child's emergency situation is limited due to retirement but does not stop working. According to him, the forecast for the completion of the reform, which is in its second phase, is at least six months.

According to Romel Araújo, Pediatric Emergency Situations, as well as other hospital wings, had to close at the time of retirement, but did not confirm that the measures would be permanently closed, according to the Fortaleza Municipal Health Department's Hospital and Specialist Section (SMS) coordinator. He also points out that all industry calls have been shifted to nearby units as well as employees. The forecast for the year is until the second half of next year.