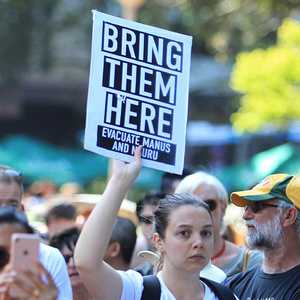 QUEENSLAND teachers are planning to step out of classrooms next week to attend an asylum seeker protest.

The walkout has sparked a slapdown from Federal Education Minister Dan Tehan, who said parents expecting teachers who were paid to teach "actually teach".

The Queensland Teachers Union will back any teachers who want to walk off the job next Tuesday to protest the rest of the refugee children and their families in Nauru.

The Federal Government can not take action against the action, as teachers are employed by the Queensland Government and are not covered by the Commonwealth Fair Work Act.

The planned "walk-off" will take place at 2.30pm, "if the children and their families have not been released from Nauru."

It could cause chaos in schools, which will need to be organized for students or have parents pick up their children early.

The protest is despite the suggestion that all children will be off Nauru by the end of the year.

Mr Tehan asked why a non-workplace issue was a subject of industrial action.

"What people do in their free time is their own business, but parents and hardworking taxpayers expect that when teachers are being paid to teach, they actually teach," he said.

"Partisan politics should be played outside of school time."

This is the latest overtly political action from the QTU, not related to schooling, after it earlier this year backed Eureka Stockade flag being put into schools in solidarity with the militant CFMMEU.

Queensland Education Minister Grace Grace is seeking advice from the department on the situation.

QTU boss Kevin Bates said protesters would work with the school's principal to ensure they had the capacity to deal with absentees.

"The federal education minister does not employ any teachers. We are sick and tired of federal politicians thinking they have the right to intervene in education, which is a state issue," he said.

"I would emphasize that if the children come off in Nauru, there will be no action next Tuesday."

He said that the total number of teachers participating in and schools affected would be determined once the ballots were held by members at the end of the week.

Prime Minister Scott Morrison this week said there were less than 30 children remaining in Nauru.