Inflation in Mendoza reaches 50%, driven by gasoline and tariffs

The The Mendoza Consumer Price Index (CPI) increased by 2.8% in November and reached a saving value of 49.6% by 2018. The good news is that there was a significant deceleration in September and October; The bad thing is that even that Inflation in the province is highest throughout the country.

According to reports published Directorate for Statistical and Economic Research (DEIE)which has grown most during the year, is "Transport and communications", with changes 63.8%. At this point, fuel, transients and mobile phone lines are being considered, with the exception of other products and services.

The second most significant change in 2018 is "Maintenance of the equipment and the house", increase for 58.5%. According to a survey conducted Andy, until November was devices with an increase of more than 100%, which largely explains why this item is one of the key players in PCI.

Prices for "Housing and basic services"It increased in eleven months of 2018 54.6%. In this case, the increase is directly linked to the increase in electricity, gas and water tariffs, which have several adjustments in the province. It should be noted that this item plays a role in the general PCI.

The same applies to "Food and Drink" which undoubtedly forms the most sensitive item in the inflation index. According to DEIE measurements, the prices of this product have already increased 49% until 2018.

Another increase, which affects the pockets of the people of Mendoza, is that "Medical care and health care expenses". Prices related to this line have increased 47.1% from January to November, was mainly driven by the rise in the dollar. The sector rapporteurs have confirmed that the costs of all raw materials for the healthcare sector are closely linked to the exchange rate, with the exception of salaries and occupational contributions.

So much less is the cumulative increase in unit prices "Other goods and services". According to measurements, the 2018 increase, if not month to complete, is 41.6% this product and service group.

Post clothing, on the other hand, changed 31.1%. Although some increases in this item may be due to seasonal problems, the annual accumulated analysis clearly shows the trend in the industry. Apparently, clothing prices have risen below the overall inflation, which is logical given the poor performance of this item during the year.

Meanwhile, no "Recreation" and "education" grew 27.8% and 22.3% respectively, these two items are the smallest variations in the eleven months of this year. 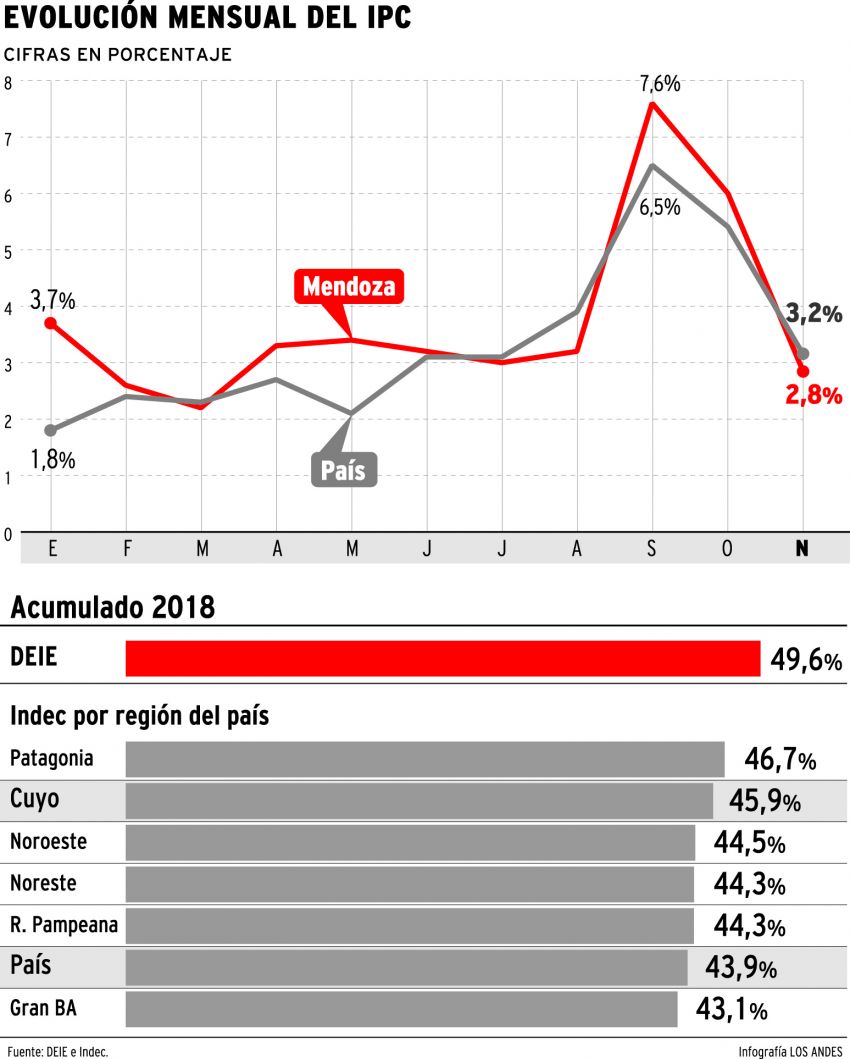 Mendoza's consumer price index is higher than the national CPI and the region-wide level National Institute for Statistics and Census (Indec).

The category-by-item comparisons make it possible to understand why Mendoz CPI is the highest in the country. The fact is that the biggest increase in our province is "equipping and maintaining homes" and one of the largest increases in "food and drink", "housing and basic services" and "transport and communications", for all items with a high incidence of general PCI.

However, apart from the difference between Mendoza and the rest of the country, economists explained that there are some technical aspects that partly explain the very different results. Sebastian Laza, Economic Advisor to the Ministry of EconomicsHe pointed it out Indec and DEIE categories "Housing and basic services" have different measurement methods.

"The nation changed the way it priced at this point, which is no less, given that it is intended to raise tariffs. If that were not the case, Mendoza inflation would be very similar to that recorded at national level," he said.

Also economist Pablo Salvador, warned that the methodology was different. "The basket used at national level is very different from Mendoza. In our region, the" transport and communications "pace is 25% of the overall PCI, but at the national level it is 14%," he said.

In addition, whether the Mendoza consumer price index is higher or national, the fact that price increases have a negative impact on the local economy. Pablo Salvador, in explaining the effects of the annual 50% PCI, has been rigorous: "The price increase has been very high, and the private sector has virtually no payroll. consumption has declined and has undoubtedly led to more people below the poverty line"

"On the other hand, we have to keep in mind that the Mendoo government prepares a budget in line with the national PCI, which is why it is disadvantaged at six points during the budget," he said.

Sebastien Laza acknowledged the same problem. "There is a real impact: many workers have lost their purchasing power"he said.

"But in Mendoza, we have the advantage of having an activation clause, which has allowed state employees not to lose inflation," recalled the adviser to the Ministry of Economics.

According to a report published yesterday by the Department of Statistics and Economic Research (DEIE), the Mendoza Consumer Price Index (PCI) rose by 2.8% in November, mainly due to the fact that the item "Medical care and health care expenses". Official data indicates that prices related to this sector were Increase by 7.3% for October.

The growth recorded in 2007 was also significant "Other goods and services" (6.2%) and inside "Education"which was different 5.9% eNot related to the previous month. However, the frequency of categories "Food and Drink" with a monthly increase 3.2%. Although the increase was lower than the other items mentioned above, it is higher than the Mendoza general consumption index.