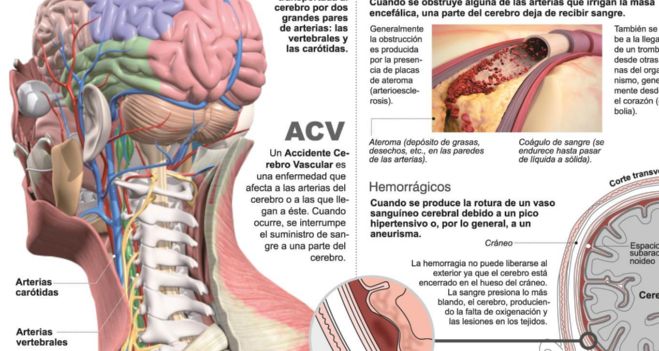 Every 30 minutes, a patient with Cerebrovascular Disease (CVA) dies or is permanently disabled due to receiving treatment in the wrong hospital, so "fundamental" is the role of emergency medical care and referral to an appropriate center. meeting in Santiago de Chile.

At a round table with recognized neurologists from the Argentine news agency Telam, the implementation of the Angels Medical Care Initiative, promoted by the European Stroke Organization (ESO), which is already operating in Argentina, was explained.

"Accessing this system is important for access to good hospital care," said Adolfo Savia, an emergency specialist in Argentina.

The doctor explained that emergency medical care is the one who takes the first attention and chooses a hospital where the patient will be sent, which is not always the closest. "It is very important to get into the system with the help of ambulance, who has to choose a health center and inform how long it will be with the patient so that they can prepare and wait," he explained.

Clay said that after ACV "1.9 million neurons per minute die", it is "not essential to spend time waiting for the lift or filling out forms". The Inglu Initiative, presented in October 2018, offers training, virtual simulations and standardized protocols for stroke treatment.

It was launched in Europe, and in Latin America it is already operating in Argentina, "where 79 public and private centers are registered, 39 are capable of processing ACVs," the organization said.

According to ESO, there are 1,500 hospitals with "certified methodology" worldwide and the importance of the initiative is that "more than two-thirds of patients suffering from acute stroke do not receive treatment in a specialized center".

Ramos Mejía Hospital's ACV department was the first to operate in the public health center in Argentina and also in the first city of Buenos Aires, said Leonardo González, neurologist and head of this unit.

"In 2015, we started thrombolytic treatment – consisting of the blood-clotting of drugs – regularly, and from there we improved the time, and that the angels had a lot to do," he said.

The specialist explained that the global initiative "provides tools and training to improve care". "As a public hospital, we receive a large number of people from the city of Buenos Aires and also from other hospitals, so the time is important, and it shouldn't be longer than the patient arrives until he is treated," said González. .

He went on to say, "We have to keep in mind that in a public hospital it is sometimes more difficult than in other places, because we have shortcomings that can lead our efforts overboard, such as the elevator does not work."

According to the World Health Organization (WHO), 15 million people each year suffer from stroke, of which 5 million die. In Argentina, it is estimated that every 4 minutes a person suffers from a stroke that causes 18,000 deaths each year.

Tobacco, overweight and other risks

> Race: Black people are more likely to have a stroke than other races.

In turn, there are lifestyle risk factors that can be changed. These include smoking, overweight, obesity, cardiovascular depletion, significant or excessive consumption of alcohol and drugs, including cocaine and methamphetamine.

Medical risk factors that can be altered are high blood pressure, high cholesterol, diabetes and a family history such as heart failure, heart failure, and heart infection.